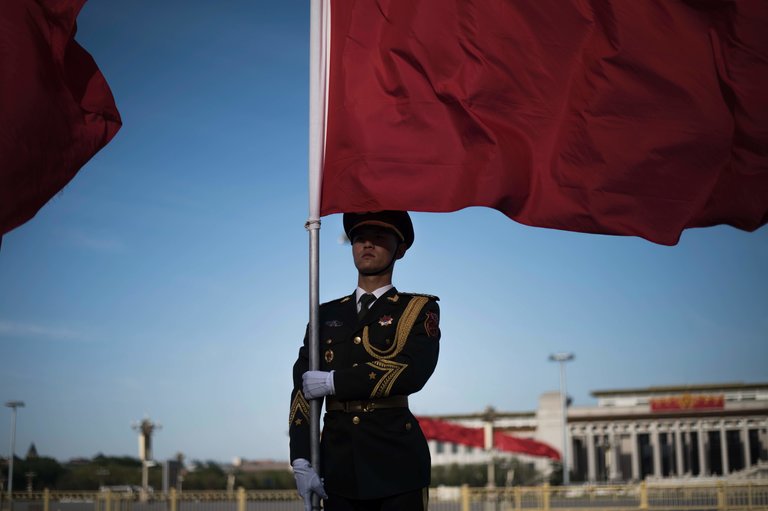 BEIJING — The brass band strikes up and a squadron of young female singers, known as the 56 Flowers, launches into a rousing anthem to Mao Zedong, whose giant, smiling portrait looms over the stage.“Sailing the seas depends on the helmsman,” the singers and a backup choir warble in the Great Hall of the People, a vast venue usually reserved forChina’s legislature and other official meetings. “Making revolution depends on Mao Zedong Thought.”

The 56 Flowers singing group performing "Sailing the Seas Depends on the Helmsman" in praise of Mao Zedong. Video by chunningIt was an extravaganza worthy of China half a century ago, when Mao was treated as a political demigod — before the bloodshed and disillusionment of the Cultural Revolution had battered his cult of personality.But the 56 Flowers’ big show happened last week at one of Beijing’s central political sites, and it has ignited accusations that officials connived in rekindling Cultural Revolution-era veneration of Mao right before the 50th anniversary of the start of that traumatic era. Video from the concert has spread online, fanning the controversy.In another part of the show on May 2, a red banner appeared across the stage with pictures of soldiers and a slogan from 1970: “People of the world, unite and defeat the U.S. aggressors and all their running dogs.”Ma Xiaoli, the liberal-leaning daughter of a late Communist Party veteran, warned in a letter published online that the organizers of the show were playing with ideological fire by reviving slogans and songs associated with one of the most harrowing times in modern China. “Sailing the Seas Depends on the Helmsman” was written in 1964, and it became a standard during the Cultural Revolution.“This performance had many elements that were deeply colored by the Cultural Revolution, and this should prompt vigilance and concern,” Ms. Ma wrote.“Beware of the revival and resurgence of the Cultural Revolution,” she added. “This was a vile episode in turning back history.”Ms. Ma has in turn been condemned online by neo-Maoists who argue that political liberals are using controversy about the Cultural Revolution to vilify their political idol.“This just shows the importance of history as a proxy war for current political debate,” said Jude Blanchette, an American researcher working in Beijing who is writing a study of Mao’s contemporary legacy.

The controversy has also shown how difficult it is for the Communist Party to police its own propaganda policies, meant to burnish Mao’s public halo but without reviving fears of a return to purges and tumultuous mass campaigns.The concert took place just steps away from Tiananmen, where Mao’s portrait hangs. President Xi Jinping, in particular, has sought to protect Mao’s legacy from critical discussion of the Cultural Revolution and other upheavals. He would rather not revive such divisive memories. Yet officials also stand by the party’s past condemnation of the Cultural Revolution, which sought to shift the blame to Mao’s radical underlings.“This proves the enduring danger in the party’s own history for the party itself,” Mr. Blanchette said of the contention over the song. “Indeed, how can the Chinese Communist Party and Xi Jinping argue that ‘history is the best textbook,’ but then make blanket prohibitions on historical remembrance, both the positive and the negative?”Who was responsible for organizing and approving the more provocative parts of the performance remained unclear. Everyone involved seemed to deny responsibility. Many initial reports about the show, and the ensuing debate, were stripped from the Internet, and the website for the 56 Flowers was down on Monday.The China National Opera and Dance Drama Theater, which helped to organize the concert, said in a statement on Friday that it had been misled about the show, which it thought had the backing of the party’s propaganda department. A district cultural committee in Beijing in charge of vetting such shows also said it had been deceived.But Chen Guang, the manager of the 56 Flowers, said in a telephone interview that he had not misled anyone and that the group had no intention of fanning nostalgia for the Cultural Revolution.“The only thing I want to say that we did not engage in any fraud,” Mr. Chen said. “The songs, the concert, it was all organized by us, and it was our kids who sang it. That’s our spirit, and that’s the song we wanted to sing. But we didn’t promote Cultural Revolution by doing this.”But while the propaganda authorities may have disavowed this particular show, the 56 Flowers is the kind of ensemble that could only flourish with official help.8

COMMENTSMr. Chen and his partners founded the group of young women, chosen to symbolize the 56 ethnic groups recognized by the government, as a wholesome counter to the South Korean and Japanese girl bands and boy bands that many young Chinese adore.The group’s website, before it went down, dismissed critics of its blend of cute pop and party propaganda. The 56 Flowers, it said, would “resist the infiltration of external pop idol culture and steadily grow in order to wage a counteroffensive.”