Buying luxury clothes online right off the runway. Trying them on virtually. Not having to wait months for the new collection to ship.

As the fashion world comes to London for its semi-annual round of minutely choreographed catwalk shows, luxury designers are shaking up the traditional show and rethinking the way they reach customers to adapt to the age of social media and e-commerce.

Fashion shows have long been about dictating taste, a chance for designers to court powerful magazine editors like Vogue's Anna Wintour in hopes of winning favourable reviews and, better yet, glossy photo spreads that fashionistas would pore over before going shopping. But in a digital world where trends rip through social media in an instant, bloggers and celebrities are increasingly deciding what's hot. And customers want it now.

"There's been a general view that the way fashion shows have operated has become increasingly outdated, especially with fashion shows more open to the mass market on Snapchat, Instagram and Facebook," said Andrew Hall, a retail consultant with Verdict.retail. "People are able to see it instantly nowadays, when in the past they would be able to consume it only through fashion magazines." 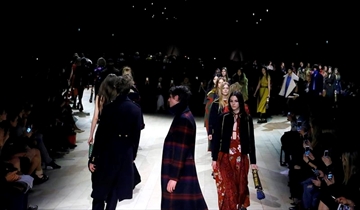 A host of designers are trying to reboot the system.

Rebecca Minkoff is selling the designs right away online. Her hashtag: #SeeBuyWear. Burberry has plans to ditch the time-honoured tradition of showcasing clothes six months before the season they are meant for sale. Beginning this fall, it will increase its focus on seasonless clothes and make its designs available as soon as the models show it off. The company also plans to combine its men's and women's lines in a single show.

Diane von Furstenberg skipped the runway format altogether, offering an immersive experience that offers a vision of the shape of shows to come. She presented her latest collection with a party in her New York offices, featuring vignettes showing models wearing the clothes while travelling, working or getting ready for a party. Guests also got a chance to look up close at the garments — an effort at interaction with the public.

"This is a huge moment for the industry," Matthew Drinkwater, head of the Fashion Innovation Agency at the London College of Fashion said. "The industry for some time has been moving in this direction."

The Council of Fashion Designers of America, a non-profit trade organization, has asked The Boston Consulting Group to study the future of fashion shows, "with the aim of fixing what many industry experts consider a broken system that confuses consumers." The council says the consultants will study more intimate presentations and larger "production shows that are consumer-facing and more closely aligned with retail deliveries."

Drinkwater said all sorts of changes are on the table, including the possibility of virtual fashion shows where consumers would be able to digitally try on the clothes.

The changing face of fashion is clear at Burberry, which shows in London on Monday. Christopher Bailey, who is both the company's CEO and chief creative, announced his plan to slash the time it takes for customers to obtain items they see on the runway.

Designers have broadened the audience for fashion using tools such as "livestreaming, Instagramming, or showing online," Bailey told the Business of Fashion, a website that covers the industry.

"You're creating all this energy around something, and then you close the doors and say, 'Forget about it now because it won't be in the stores for five or six months,'" he said. "The reality is that, today, we're bombarded with images, film and music. To try to recreate the energy that you created five or six months ago, you've got to just question how relevant it is."

The clothes in Burberry's future shows will be immediately available both in store and online. The move into digital has been Bailey's trademark, and his success or failure in making it work could have big consequences for the business.

While many luxury houses resisted embracing e-commerce because of fears the experience was not up to scratch, Bailey offered a counter-narrative. Bailey, who became CEO in 2013, made sure Burberry's shows were featured on a variety of sites — even ones with smaller audiences that are still extending their networks, like Periscope and Snapchat, said Anusha Couttigane, a retail expert at Oresa, an executive search firm.

"This has contributed to Burberry's worldwide exposure and created an immersive experience that keeps the brand front of mind, even among consumers who might otherwise be financially cut off from the brand," she said. "It stimulates a following not only among Burberry loyalists, but potential customers too, and this plays an important role in recruiting future custom."

That foothold in digital has helped bolster Burberry's global reach and is important as it tries to boost sales overseas, particularly in China — where only the hippest and quickest are likely to survive the economic downturn and anti-corruption laws have curtailed the gift-giving that once buoyed the luxury market. Brands like Burberry have invested heavily in Asia on expectations that an increasingly wealthy population would drive sales.

The digital revolution is difficult for the luxury world, which has been wary of courting a broader audience for fear of losing the mystique that fashion houses market along with their garments. The efforts to change the fashion show aren't an attempt to undercut mid-range brands like Zara, but a reflection of the luxury houses' desire to emulate the ability of such brands to deliver — fast — on what their customers want.

The change is a big risk for houses like Burberry as the strategy assumes complete confidence that Bailey will be able to come up with the designs people want to buy without the adjustments fashion houses often make in the months between the shows and the time the clothes appear on the rack, Hall said. Those months were used to talk to buyers, gauge response to products and give clothing-makers a good idea of what was going to sell — and to prepare their stock to suit.

"There's going to be some big gambles on product," Hall said.