Scientists have discovered the gene that produces the brilliant red color in male birds like the northern cardinal.

The researchers also found an enzyme that they suspect converts a yellow molecule, which the birds obtain by eating seeds, leaves, and fruit, into a red one. This enzyme is active in the eyes of red and yellow birds, where it plays a role in their ability to see color. But in red birds, the enzyme is also active in the skin and feathers.

“In many bird species, the redder the male, the more successful it is at finding mates,” says the study’s co-senior author Joseph Corbo, an associate professor of pathology and immunology at Washington University in St. Louis. 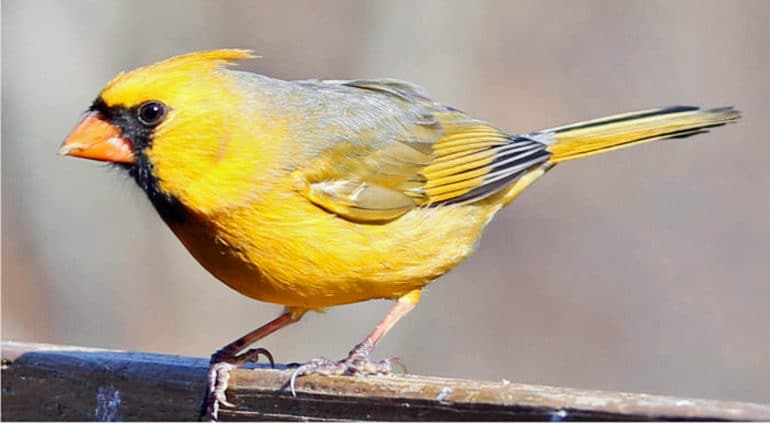 “Nobody knows for sure why red color is associated with reproductive success,” Corbo adds. “We thought that if we could figure out how they produced that red color, that would help us understand the advantage to being red.”

The yellow and red colors in bird feathers come from organic pigments known as carotenoids. Birds obtain yellow carotenoids from their diet.

The scientists focused on a bird called the red factor canary to study the origin of red coloration. The bird originated in the early 20th century when commercial breeders crossed a wild South American bird called the red siskin with the common yellow canary. The breeders selected the reddest offspring and bred them to canaries again. In this way, over several generations, they created a bird that looked like a canary but was red.

The scientists expected that, after so many generations of crossbreeding with yellow canaries, the DNA of the red factor canaries would be derived almost entirely from their canary ancestors, except for the DNA areas related to coloration, which would have come from the red siskin side. 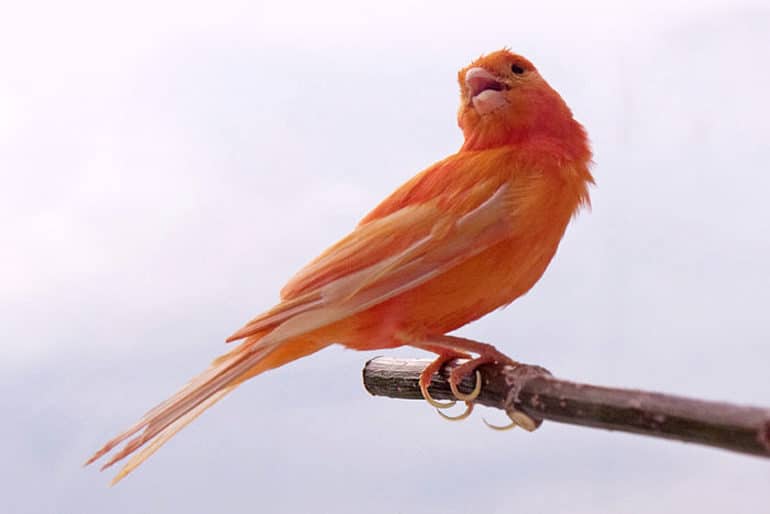 The researchers compared the genomes of the red factor canary, the red siskin and the yellow canary and found differences in two regions of the genomes.

One region contained a gene for an enzyme that is thought to trigger the conversion of the yellow carotenoid into a red one. Corbo and colleagues showed that the gene CYP2J19 was turned on in the skin of red factor canaries, but not in the skin of those that were yellow.

The other region contained a gene involved in the growth of feathers and skin.

“EVERY ONCE IN A WHILE, A YELLOW CARDINAL IS SPOTTED IN THE WILD…”In yellow canaries, the gene is turned on only in the eyes, where it is thought to create red molecules that act as a light filter and help the birds see color. In red birds, it is turned on in the skin, feathers and liver, in addition to the eye.

Since the gene is widespread in birds, many birds may have the potential to have red feathers. However, if the gene isn’t turned on in their skin, they don’t get the benefit of scarlet plumage.

“There are whole groups of bird species in which the ancestral bird was yellow and most of the daughter species are yellow, too, but here and there you find a red species,” says Corbo, who is also an associate professor of genetics and of ophthalmology and visual science. “It suggests that somewhere along the line that red gene got turned on in the skin, and then it spread throughout the species, maybe by sexual selection.”

The next step is to track down the stretches of DNA responsible for turning on CYP2J19 in the skin of red birds but not yellow ones. To do so, Corbo is on the trail of the rare yellow cardinal.

“Every once in a while, a yellow cardinal is spotted in the wild,” he says. “We hypothesize that this is a rare mutant that is unable to produce the red carotenoid. If we find that yellow cardinals have a mutation inCYP2J19 or its regulatory elements, that would provide even more evidence that this gene is important in red coloration. We’ve got a tiny piece of tissue from a museum specimen, and we’re looking for a mutation now.”

Corbo’s team worked with scientists at the University of Auburn in Alabama and the University of Porto in Vairão, Portugal. The Portuguese team, led by Miguel Carneiro, initiated the project. Their work appears in Current Biology.

The research received funding from the Fundação para a Ciência e Tecnologia through Programa Operacional Potencial Humano – Quadro de Referência Estratégico Nacional funds from the European Social Fund and the Portuguese Ministro da Ciência, Tecnologia e Ensino Superior; the Research Centre in Biodiversity and Genetic Resources and the University of Porto; the North Portugal Regional Operational Programme; the European Regional Development Fund; the European Union; the National Science Foundation; the Office of the Vice President for Research at Auburn University; the Human Frontier Science Program; the National Institutes of Health; and the McDonnell Center for Cellular and Molecular Neurobiology at Washington University.